Joss Naylor tries out the power of poles

Joss Naylor MBE is otherwise known as the King of the fells because he has broken so many long distance fell running records. Famed for his ability to scale peaks like a mountain goat (72 in one event) as well as cover distances up to 100 miles he has broken numerous records in his long career.

A Sheep Farmer who was born in Wasdale and is now in his mid eighties, Joss is still running and in 2019 set out to complete the 18 mile Lakeland trail because although he had completed it 51 times (and won it on several occasions), he had been forced to withdraw in in 1962 and it bugged him! 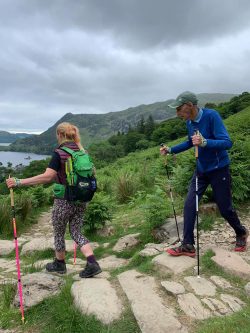 At his peak in the 1970s Joss broke the Lake District 24-hour record three times, ran the fastest known times on the Three Peaks, Pennine Way and Welsh 3,000ers.

Joss has overcome injuries to his knees and back in the past and is determined to keep going as long as he can so Nics Sproson from WALX Hellvellyn and Ullswater was delighted to be asked to show him how poles can help with posture and weight bearing.

It appears they did not stay on the flat for too long during the session though! 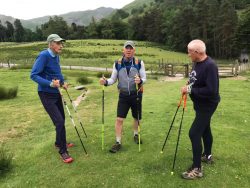 Nics told us “It was a brilliant morning and it’s not just all about fells, poles or running, it’s local banter, history and sharing of energy from what surrounds us. As we chatted over tea at the end we discovered a further connection to Patterdale & my own family as my Great Grandfather actually baptised Joss in 1936!”

Here’s to many more years of skipping over those fells Joss, you are an inspiration to us all.